I don’t trust his female friend. Am I crazy? 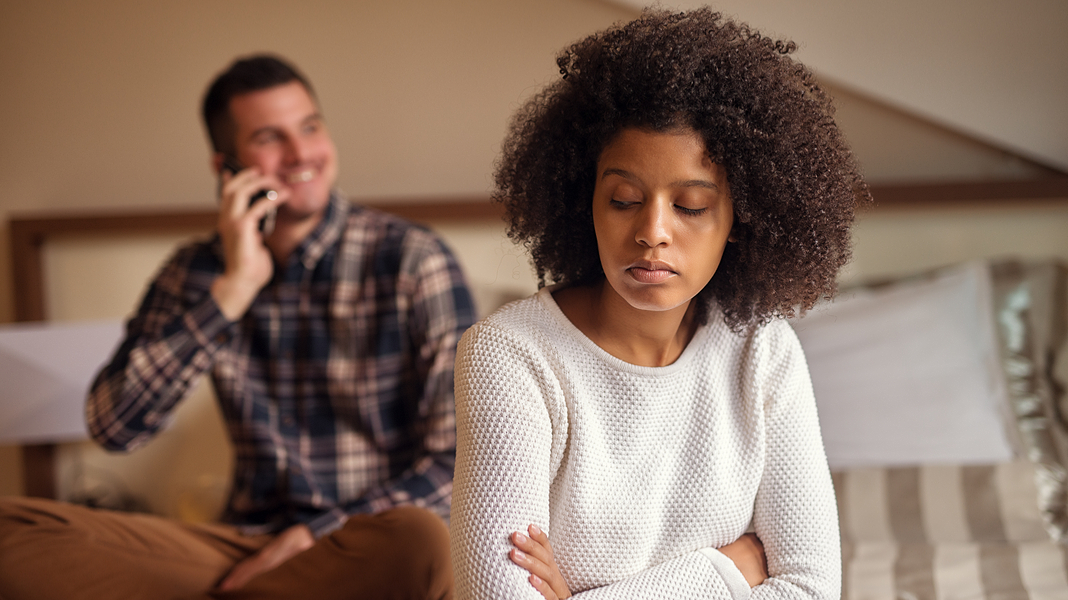 Hi guys. I’m new here… I can’t discuss this with anyone in my life, so *really* I hope you can help me wrap my head around this problem.

Lately, I’ve been stressed by a new addition to my boyfriend’s life: his female friend from work.
He and I are in our 20s-30s and have been together for two years. We’ve had a solid and happy relationship until this point…and it’s still mostly happy as long as his “friend” doesn’t come up in conversation.

The summary is this: I don’t trust his female friend AT ALL. And I feel that my boyfriend should be more alert to the red flags that I’m seeing from her.
Henceforth I will call this girl “Lacey” and I’ll call my boyfriend “Joe.”

Here are the facts on Joe:
– He’s extremely mellow by nature.
– He’s nonjudgmental (a little too much, in my opinion)
– He’s extremely loyal and respectful towards women.
– He’s a clear and honest communicator.
– My happiness is one of his greatest priorities, but he won’t compromise his values or beliefs to please me.
– He gets sad about the fact that he has very few friends. He doesn’t want to lose Lacey’s friendship.

Here are the facts about me:
– I’m pretty smart and diplomatic.
– I’m a pretty good judge of character and strongly dislike unethical people.
– I’m not a jealous person and know that I can’t change someone or dictate how to live their life.
– If there is a conflict, I always scrutinize my feelings and perspective before the other person’s.

Here are the facts on Lacey:
– She’s in her mid-twenties and is single.
– She comes across as attractive and normal…. until you know her backstory.
– She got pregnant as a teenager and has two kids by two men. She was married to Dad#2 until he cheated. Then she started cheating WITH him on his currently-pregnant girlfriend. She felt zero guilt about this. Now Dad#1 has temporarily moved into her apartment with his new girlfriend. Lacey is now cheating with him instead. Again, she feels no guilt for doing this.

Besides those scary facts, this is my biggest problem with her:
She seems clueless about proper behavior when being friends with a man in a relationship. Here are some examples:

– When Joe and I first started hanging out with her, we’d go out every weekend. Then I started realizing she had no interest in being friends with me. She ignored my existence 90% of the time and only talked to Joe about work or her life. Also, she would only text him, not me. I found it very rude and started not wanting to hang out with her.

– While she was cheating with Dad#2, she would show Joe VERY EXPLICIT texts that Dad#2 would send her. Things like, “I wanna lick your *bleep* and make you *bleep* while you *bleep* my *bleep.” I think it’s very inappropriate that she showed these to my boyfriend.

– She came over once to hang out. I got tired at midnight and went to bed. Instead of leaving soon after (which seems proper to me), she stayed and talked with Joe until after 1:00 am.

– She has asked to have dinner with Joe on a Friday/Saturday evening a few times. Once, they were out for about 6 hours. I ended up going to bed by myself. My boyfriend insisted that it was fine and normal. I feel it wasn’t right.

– The last time she came over, she kept pressuring my boyfriend to smoke a cigarette with her on our balcony, knowing that I wasn’t happy about it. I didn’t like the vibe I got from that.

During this same evening, she talked about the banter she & Joe engage in through text. She sounded like a teenager bragging about thinly-veiled flirtation: “Omigod, like, he’s SO MEAN to meeee! He said I was uglyyyy,” she said while laughing. “Even when I make little sad faces in my text, he’s still mean to meee!” ……… I just sat there like, Really? You think I wanna hear about what you two banter about? Joe insists that he knows what flirtation is, and doesn’t flirt with her.

– In the past month, she quit her job at the place where she and Joe worked. Now she has a lunch shift that coincides with Joe’s. They’ve gotten lunch together a few times now. And she has posted two Instagram photos of them at lunch together. She likes referring to him as her BFF (“best friend forever”). In the second photo, she was pressed against his side with her hand wrapped around his upper arm. It was a pose that could be construed as either innocent or a bit too cozy.

So that’s it in a nutshell. I keep trying to avoid blaming Joe for condoning and going along with her questionable behavior (especially those dinners they used to get). I don’t want to blame him because, all this time, he’s been 100% upfront and honest about their interactions, and he said he’d never be inappropriate or cause problems. He also thinks I’m judging her too harshly and reading too far into her behavior.

I think he’s ignoring red flags, ESPECIALLY the fact that she’s a shameless cheater! And I think he’s egging her on by condoning questionable behavior: letting her take pictures of them together, buying her a funny shirt, texting her regularly, etc.

I just don’t know how to feel about this, guys. I hope you can tell me your thoughts about this. I know that asking him to end their friendship is out of the question. That’s not my job as his girlfriend.

I would really appreciate any advice or thoughts you guys have on my situation. It’s so hard feeling so alone. :'(

I am with the love of my life. I’m developing strong feelings for someone else, and I don’t want them!

He couldn’t cope with my depression

My Man Is Mine Alone; Discover What I...